The following is a précis of Jimm Yarrow's report on the public footpaths, which shareholders are urged to read as it contains information about the use of the fields.

The full text is Here (opens in new window)

This involves regular inspection of the paths, and keeping the ways clear to use by clipping the nearby vegetation, particularly around path furniture such as stiles and kissing gates. More major issues must be reported to the Paths Officer at S.C.C.

Shareholders no longer require members of the public to keep to the public paths in our three fields, but I have added way-markers, so that people specifically walking the paths are helped. Where we replaced the former metal frame with a new wooden kissing gate by house 126 Whatcombe Road, opposite the Upper Whatcombe junction, there are no way-markers, as this is not, and never has been, a public footpath.
When we use the fields which we do not own as SOSWF, their private nature should be respected, and one should keep to the public footpaths. 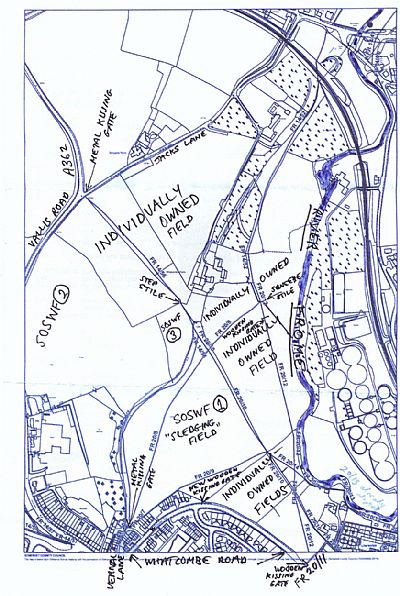 Drainage and path flooding (but see below 4th April 2017)

On 28th December Jimm Yarrow and Mark Date installed a double pipe under the public footpath at the worst flooding point. The water flows more easily now and the path should drain gradually. They did not have quite enough hardcore and gravel, so they will complete the task when Mark has accumulated some more materials. 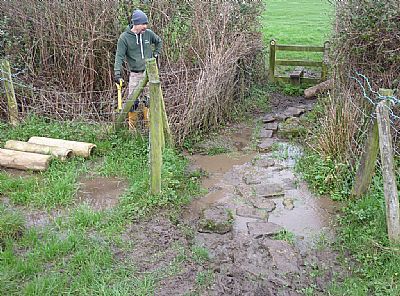 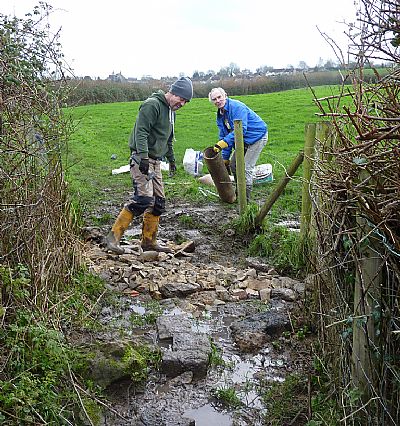 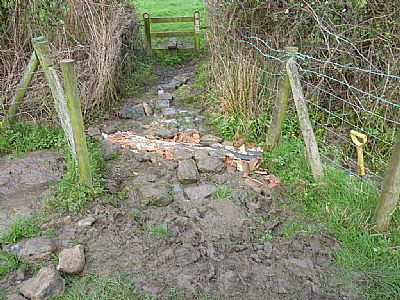 Today we replaced the drainpipes under the public footpath. The previous ones had successfully drained the path surface and the nearby wet area, but struggled in times of heavy rainfall. The faster flow of the spring brook had brought quantities of calcified reeds down into the drain. After the recent hedge trimming the offcuts had also often stuck inside, the smaller pipes being the perforated style. We trust the larger ones will need less clearing out.

We have covered the new pipes with hardcore as before, which will be monitored this as it beds down. If necessary we will add some gravel to the path surface.     JY & IM 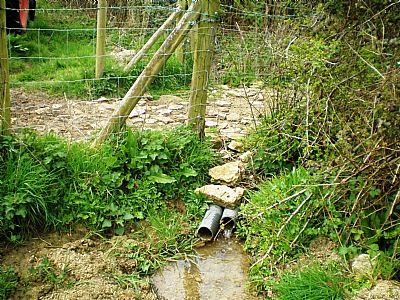 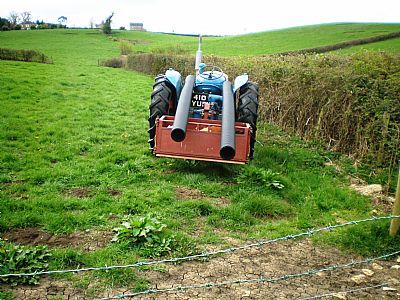 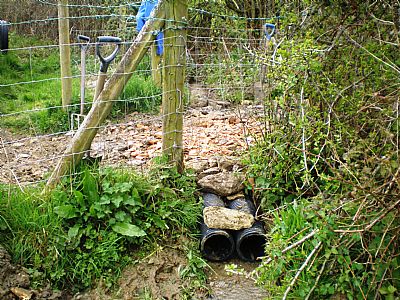 Yesterday Ian M. and I dismantled the extremely old and rather awkward iron rail stile at the lower entrance to the Sledging Field. We replaced it with a Stratford gate, see "before and after" pictures below. This will make access much easier when a new field gate is installed, as it should be chained when required to control the grazing régime when the cows return to us around the start of March 2018. 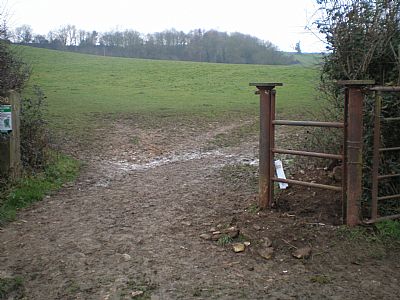 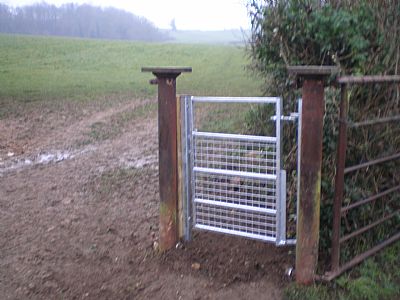 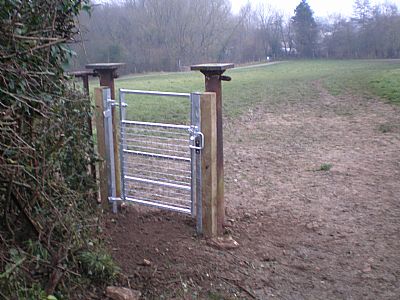 Today Les Stather - Frome Parish Paths Liaison Officer - and I installed a shortened recycled "Public Footpath" notice indicating the way down from the Ramblers' Gate by the A362 to the Public Footpaths at the lower part of the Sledging Field.

With Frome's accreditation of "Walkers Are Welcome" more walkers are likely to visit the town. Walkers often like to follow public footpaths from maps, and the sign will assist with that, although of course we do not insist that public paths are followed within the three SOSWhatcombe Fields.

The link to "Walkers Are Welcome" on Frome Town Council's website can be found under "Links" on the menu left. Several businesses in Frome, eg The Cheese and Grain Café now display the Walkers Are Welcome signs. More should follow. 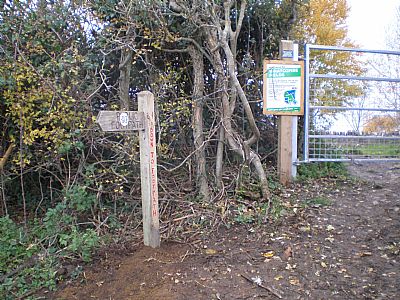 Small repair to stile (no.35848) between SOSWhatcombeFields - little field and Cooper Hall field.

The footpath no. is FR 14/56. If you are interested to see the Somerset County Council interactive map of footpaths, paste this link into your page header, or into a search engine: https://roam.somerset.gov.uk/roam/map

Then in the question box at top left type FR20/10 for one of the public footpaths within the SOSFields area. 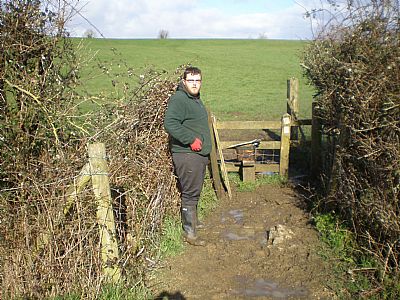 Henry F. by stile no.35848 having repaired the dog space at the right of the stile.

The strengthening crosspieces had been removed. (Why?)

Today Ian M., Henry F., and I replaced the stile between the Sledging Field and the Little Field. The stile had become rotten below ground so the cattle were able to push it and snap one of the stile's legs. The footboard and supports were also rather tired, and of older design which rocked due to the footboard resting on the lower crosspiece.

As this field boundary is on a public footpath, (no: FR 14/56,) the Mendip Area paths warden gave us the gate kit, which we collected from S.C.C.'s Glastonbury depot on Monday 21st September.

The first picture shows the stile, no.35847 as you may remember it, a few days ago. 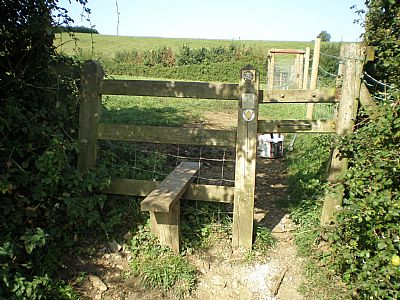 The second picture shows the new gate cage assembled, the gate on the left, with Henry and Ian dismantling the stile footboard. 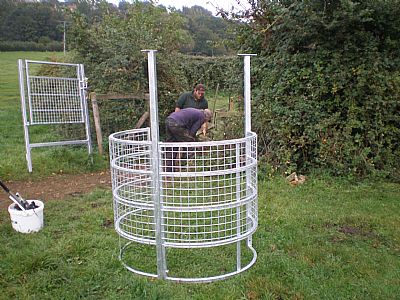 The third picture shows the gate in place, with the cage area still to be prepared. 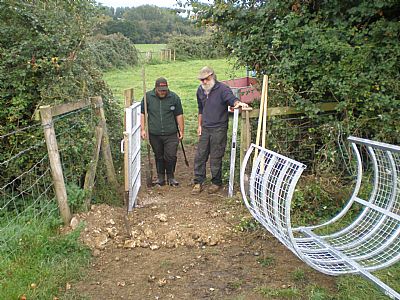 The fourth picture shows the structure finished, and the ground to be tidied up. I should not have left the bar leaning on the cage. Health & safety advice broken. Oops! 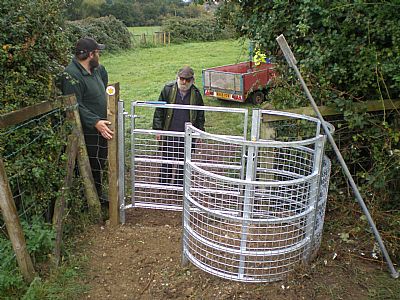 If you are interested in local public footpaths, have a look at the official Somerset County Council Rights Of Way Dept. interactive map :

You can zoom in and out, and discover where the public footpaths are within our Whatcombe Fields area, in the wider grazing area, and in the whole of Somerset. There are many facets of this map.

One important feature is being able to report a fault, for example a rotten stile or dangerous sleeper bridge. An exclamation mark in a red circle shows where a fault has been reported. Click on one to see what it is about.