I have adopted the public paths within the Whatcombe Fields area under the Somerset County Council’s “Adopt-A-Path” Scheme.

This involves regular inspection of the paths, and keeping the ways clear to use by clipping the nearby vegetation, particularly around path furniture such as stiles and kissing gates. More major issue must be reported to the Paths Officer at S.C.C.

The paths I have adopted are illustrated on this map provided by Somerset C.C. To help interpret the map, I have labelled some features in larger script, and noted which three fields belong to SaveOpenSpaces Whatcombe Fields (SOSWF  1,2,3) and which fields are individually owned ones as before. 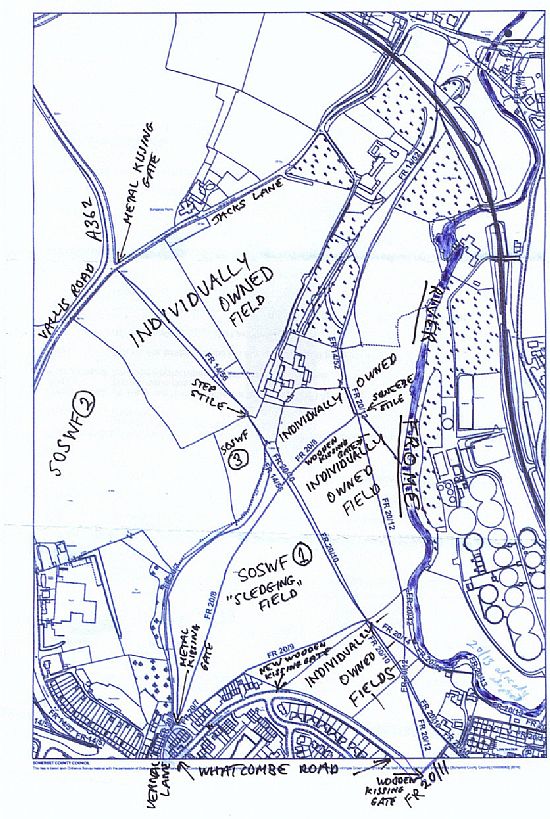 You will see that each path has a code for Frome – FR and a number 14/52, 14/56, 20/7, 8, 9, 10, 11, 12 & 14. Path 20/13 is not within the fields grazing area, and has been adopted by another volunteer. The thicker lines are the paths, the thinner ones being field boundaries. So far, in addition to clipping vegetation, I have assisted the landowner in placing large stones to use as stepping stones if water accumulates at the kissing gate at the fence dividing path 20/12. We trust that this improvement means the fence will not be cut again. (Update: Vain hope there then!)

I have also placed several large stones in the partly flooded section of path 14/56 just before the stile at which the path leaves SOSWF land and crosses the upper field to the recently erected metal kissing gate at the Jacks Lane junction.

Update:29 December 2015: Our shareholder Mark Date (MJD Services, phone 07525-433611) and I have installed a double conduit pipe across under the footpath to help prevent such a wet section.

I have additionally affixed some new Somerset C.C. Public Footpath way-markers to clarify lines of the public paths.

Of course we as shareholders no longer require members of the public to keep to the public paths in our three fields, but I have added way-markers, so that people specifically walking the paths are helped. Where we replaced the former metal frame with a new wooden kissing gate by house 126 Whatcombe Road, opposite the Upper Whatcombe junction, there are no way-markers, as this is not, and never has been, a public footpath.

When we use the fields which we do not own as SOSWF, their private nature should be respected, and one should keep to the public footpaths.

I am pleased to report that the alterations made recently have been well received by everyone I have spoken to.