On Sunday March 20th, we had a wonderful community tree planting day lead primarily by 'Last Tree Dreaming'. This is another Frome community project focussed on transporting a 250 year old oak tree from Stourhead to Frome College. Some of the group running that project are also Whatcombe Fields shareholders and so it made perfect sense to link up and plant some more young oaks to add to the few we planted earlier in the year.

Around 60 trees were planted in total, only about 15 large-ish ones, the remaining small whips, and all of which had been donated by various people. 12 of the larger ones were dug up and collected from Jonathan Thomson's land in Wiltshire again, several were brought by individual shareholders and the majority of the small whips were fetched by Frome Town Council Ranger Mike who had needed to remove them from another site with his volunteer crew from Critchill School. Great recycling! And a big thanks to everyone who contributed and helped.

We shouldn't expect all of the trees to survive since we were planting a little bit later than ideal in the season but if we can recruit a team of volunteer waterers over dry periods this summer, we hope to keep as many as possible thriving. 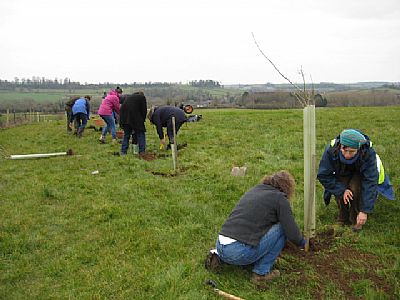 At the bottom of the field the Last Tree Dreaming team had put up a shelter and wood carver Anthony Rogers was demonstrating his craft and allowing visitors to have a go.

Azeema made a huge pan of wonderful soup warmed on the fire - perfect on a quite chilly day. Matthew from the Somerset Wildlife Trust ran various activities for the little ones and Helen told everyone all about the Last Tree Dreaming project and the aim to revive Selwood Forest. 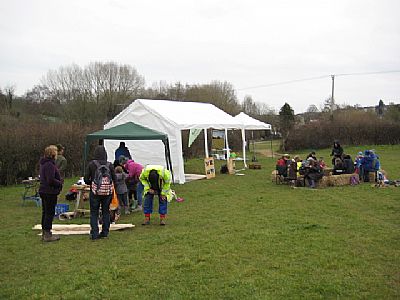 Due to the tree planting with Last Tree Dreaming on 20th March 2016, I have lengthened the temporary fence around the new trees area, and constructed a stile so the site can be accessed if needed eg to cut the grass by strimmer when needed. Jimm 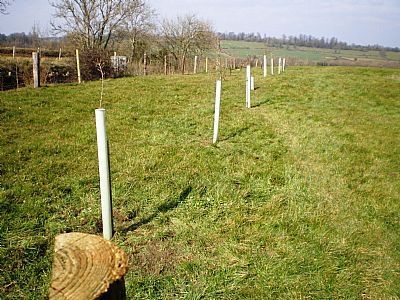